Today, it was 20 years ago that Adam Dickmeiss and I founded Index Data together in Copenhagen. There was a bottle of champagne, and our parents shared the moment with us along with our wives, because, honestly, we were little more than big kids at the time. We were a little scared, but we were also in the fortunate position of being young, still without kids or debt. Oh, and our wives had steady jobs. Let the adventure begin!

We met just a few years earlier, as interns at the State Library Service (Statens Bibliotekstjeneste), looking to make some extra money for college. We were hired during a tumultuous period, both organizationally and technologically. In Denmark, libraries benefit from substantial support from national and municipal authorities. At that time, there was an effort afoot to consolidate the services offered to the public and research libraries, respectively, into a single organization, the Danish Library Center (DBC) with a single software platform, including a centralized, national union catalog and interlibrary loan platform. Eventually, Adam and I along with a team of young programmers were given the task of creating an indexing and search engine for the new system. The task took about a year, and I still look back on it as one of the most exciting projects I have worked on. Somewhere in there, Adam managed to graduate and I managed to forget all about my studies, but we both felt like we knew everything there was to know about library technology (remember, we were just big kids!).

The new system went into production on schedule and was a tremendous success. Today, it forms the basis for a unique, patron-centered ‘national OPAC’ that gives any citizen access to the collection of every library in the nation. But Adam and I had developed a taste for big, ambitious projects. In a sense, our shared experience had made us into entrepreneurs, and we felt hungry for more.

For our first day of work at Index Data, we each brought a chair, our PC from home, and a thousand dollars which formed the entirety of the operating capital of the company. The goal of the business, we decided, would first and foremost be to provide a good place of work for us and any colleagues who might one day join us. The purpose was to have fun doing work that we loved. The business model was to create cutting-edge, client/server-oriented software (buzzword of the era) for libraries, and to finance the development by offering our services as consultants in whatever areas we could. We felt that the best place to start would be to build a complete Integrated Library System (I did mention we were just big kids).

Our workplace was a small room in a disused factory building which had been turned into rental offices. But not in the fashionable, expensive way it’s being done today. This place was rough. Our neighbors were bohemian artists and tiny film production companies hoping to make it big. Break-ins were a continuing concern, so one of our first purchases was a large steel grid that we padlocked to our door at night. At one point during a rainstorm, water started coming down through the ceiling, so we draped plastic sheets to keep our computers dry. After that, strange mushrooms would sometimes grow out of our walls. 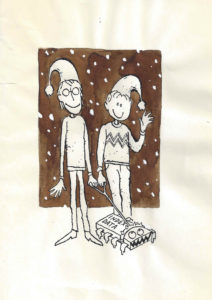 The original artwork for our first Christmas card, by Adam’s brother Otto Dickmeiss

In between consulting gigs, we worked steadily on our own software, building components that we thought we’d need for our big library system. At one point, we started releasing our software under Open Source licenses. We reasoned that someone might see the software and decide to ask us to help them work with it. Fresh out of an academic environment where Open Source projects were enormously influential (Linux was still new, then, but getting lots of attention), it felt natural to us but it was still a relatively unknown phenomenon in the larger industry and we suffered a good deal of friendly ribbing from our friends. We also endured some more pointed questions from our wives that were still carrying the brunt of the household expenses.

But something cool happened; people did find our software, and the consulting work increasingly involved integration and enhancements to our growing family of software components. Along the way, the building blocks we’d been creating took on a life of their own and became a focal point of our work; we never did build that library system, but our software components have been integrated into the vast majority of library systems out there in various roles, and we have enjoyed two absolutely remarkable decades of working relationships with exciting organizations and brilliant people all over the globe. We moved out of the mushroom-infested office and were joined by coworkers. We had kids. The Europagate project team in 1995. Adam and Sebastian in the back row

Ten years ago this summer, my family and I moved to the US. Our business gradually shifted away from Denmark and Europe, but we struggled to maintain our old, informal and very personal company culture with me way over in New England and the rest of the team in Copenhagen. In 2007, Adam and I made a decision that in some ways were as dramatic as quitting our jobs and founding the company. We hired Lynn Bailey to be our CEO and re-configured the company mentally and structurally to be a US-based company which just happened to have its core development team in Copenhagen. Soon, they were joined by colleagues in many locations as we made a policy of hiring the most talented people with a strong interest in search and library technology, no matter where they lived. Today, we are a virtual company with colleagues in six different countries (Denmark, Sweden, Germany, the UK, Canada, and in four different US states). After writing the book on operating a commercial business around Open Source Software, we had to learn how to be a tiny multinational company, and how to work well together as a team while scattered across the globe.

The company that existed ten years ago, with a jolly group of Danes hanging out in the middle of downtown Copenhagen, has been transformed almost beyond recognition. But what has arisen in its stead is in many ways more vital and exciting. Our team is passionate about their work: We swim in a ridiculously specialized area of the sea of information technology, but we do so with tremendous pride and passion. Index Data, at a recent team meeting in New England

It has been an amazing 20-year journey. We were successful in creating a fun and supportive work environment for ourselves and our colleagues. I couldn’t be more proud and grateful, both for my great coworkers and for the remarkable people I have had the good fortune to do business with.